Your region and language were selected automatically. You can change this at any time in the menu on the site.
Americas | English
Home Support Knowledge Color Know-How

Our eyes are part of the drinking experience

Our brain associates the cup color with a specific taste being sweet or bitter and having a certain degree of acidity. For example, the more the cup color emphasizes the brown of the coffee, the more bitter we perceive it to be.

Read here how the taste of coffee changes depending on whether you use a white, yellow, green, blue, brown or light pink cup.

Curious how to get the best coffee drinking experience.

Research studies conducted over the last 60 years in different countries showed a remarkable degree of consistency when people are asked to match colors and basic tastes. The physical properties of the serving cup are strongly tied to the experience of flavor of the beverages being consumed from them. Moreover, the color has an effect on our temperature sensation of the warmth for coffee [1], the perceived level of carbonation of water samples [2], the perceived intensity of certain flavors and simply the basic tastes in beverages.

Louis Cheskin, a scientific researcher, clinical psychologist and important marketing innovator, observed that people's perceptions of products and services were directly related to aesthetic design and named this relationship “sensation transference”. Colors have symbolic meanings: "We associate red with festivity, blue with distinction, purple with dignity, green with nature, yellow with sunshine. Pink is generally associated with health... White is a symbol of purity. Black expresses evil." An early research study conducted in the 60s reported that consumers rated the lemon / lime flavor in 7-Up as more intense when the beverage was tasted from a can that was 15% more yellow in color than normal [3].

Coffee is one of the most commonly consumed beverages worldwide. A variety of coffee beans with different flavors depending on their origin and weather conditions, roasting process, grinding degree or brewing methods are available. New marketing trends promote specialty coffees having high quality with a distinct flavor and can be experienced best in brand specific coffee shops. Therefore, it is important to understand the relevant factors that might enhance the multisensory experience in the coffee shop. One factor that must be considered when trying to create a truly engaging multisensory atmosphere for specialty coffee consumption is the vessel in which the coffee is served. [4]

Already in 1964 Ernest Richter, known as the "father of motivational research”, conducted a pioneering study showing that the color of the coffee cup has a high influence on how we taste coffee. Participants were asked to describe the taste of coffee served in four differently colored (brown, red, blue, or yellow) cups:

In fact, the coffee in all four mugs was the same. [5]

The most recent research study conducted by Fabiana M. Carvalho and Charles Spence in 2019 was designed to investigate the effect of the color of the cup on sensory and hedonic judgments of specialty coffee by consumers. [6]

In experiment 1 and 2 the cups were white on the inside to keep the visual contrast between the coffee and the inside wall constant and on the outside, the cups could either be white or light pink (Figure 1 - A). In experiment 3, four colored cups (white, light pink, light green, or light yellow) with white on the inside were used. Each participant evaluated four samples (cup color + coffee type) in one of the four possible sequences depicted above (1 ... 4) - see Figure 2. 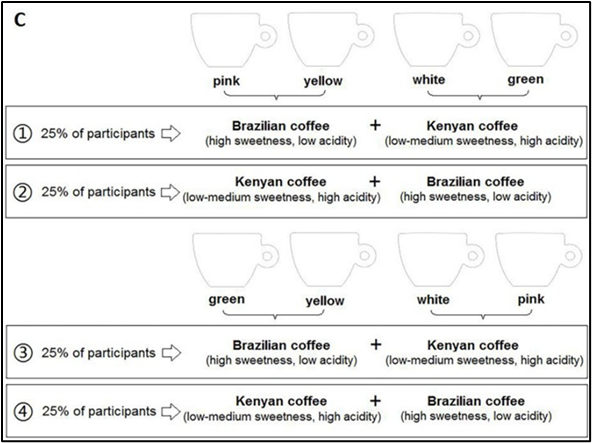 The participants were instructed to first rate, only by looking at the cup of coffee, its expected sweetness and acidity using rating scales. After having tasted the coffee, they were asked to repeat the same ratings as well as judging how much they liked it.

For all three experiments the expected and post-tasting ratings were analyzed with a multivariate analysis of variance (MANOVA) on the dependent variables ‘sweetness’, ‘acidity’, and ‘liking’, with the color of the cup as a between-participants factor.

In Experiment 1 and 2 the results of pre- and post-tasting were quite similar: The coffee served in the pink cup was experienced sweeter and to be less acidic than the coffee served from the white cup. In Experiment 2 the pre-tasting did not expect a significant color influence on sweetness. 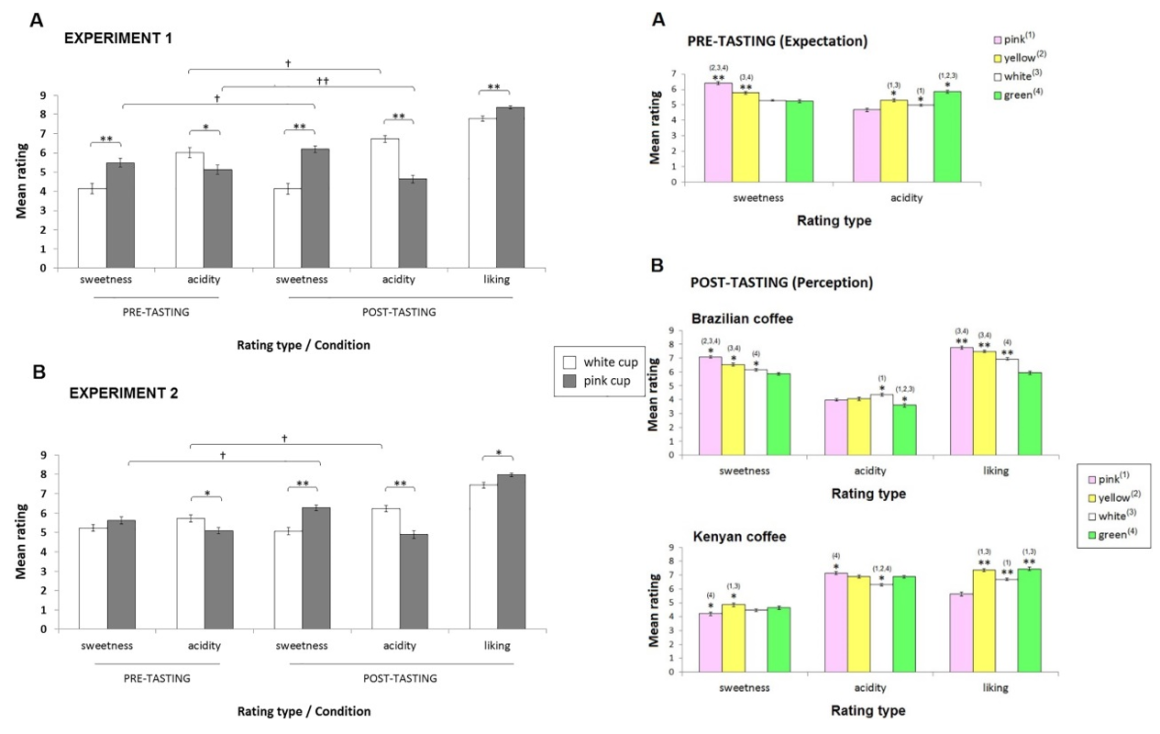 These results revealed that the cup has a significant influence on pre- and post-tasting ratings. Liking ratings significantly decreased in incongruent pairing conditions – which also increased the unexpected acidity of the Kenyan coffee when tasted from the pink cup. The color of the cup significantly impacts sensory and hedonic judgements of specialty coffee. It clearly shows that the cup is a key factor of the multisensory coffee drinking experience. Thus, specialty coffee companies should focus not only on the sensory characteristics of the coffee beverage, but also the sensory properties of the cup to enhance the experience of the consumer.

[2] PaolaRisso, Emanuela Maggioni Nadia Olivero, Alberto Gallace: The association between the colour of a container and the liquid inside: An experimental study on consumers’ perception, expectations and choices regarding mineral water, Food Quality and Preference, Volume 44, September 2015, Pages 17-25

[3] Louis Cheskin, Colours and whate they can do, BLANDFORD PRESS LTD, 1951